I loved going to the Cedar Farmers Market with all the food and candles, jewelry and all sorts of stuff, and someday I’d love to sell eggs and fruits or veggies from our farm at the farmers market too.

A few years ago we moved to a little heritage farm and orchard in Cedar, which is now my home. We have many animals like pot belly pigs, sheep, geese, goats, and over 80 pet chickens of all different breeds and personalities! So I’m sort of like a chicken expert.

Our Easter Egger hen, named Coconut, disappeared for a few weeks and then we found Coconut and her nest with five baby chicks! They weren’t all genetically Coconut’s -other hens must have helped her by laying eggs in her nest, but she hatched and raised them.

We noticed that one of the babies wasn’t walking and saw that he only had one leg, and the other was in a deformed ball-like shape. We realized that this one-legged baby would not survive without special care…. or might not survive at all.

So we decided to take the chick down to the house and raise it ourselves. We named him Beauty because we thought he was a girl and we gave him lots of cuddles. We loved having him in our house, he was a part of the family.

And we took him outside lots and helped him strengthen his one leg – in fact, his one leg became super big and strong, it looked like a dinosaur leg!

So… once he reached 3 weeks old we thought it would be good to put him back with his siblings so he could learn to be a chicken again.

But we still come and see him every single day and give him lots of cuddles. Whenever we go see him he comes hopping over to us and will sit on your foot until you pick him up and snuggle him! So I chose to do my story on Beauty and the troubles he went through.

Hi I’m Beauty and yes I’m a rooster named Beauty- but that’s besides the point. This is the story of challenges I’ve had to face as a one legged chicken. So we’ll start from the very beginning.

I had finally broken out of my shell and I stayed by my five brothers and sisters while they hatched beside me. My mother – who looked nothing like me squealed happily. All of my siblings did not look like me. A day or two passed and it was time we learnt how to get out the nest and go get food, but I couldn’t walk. Every time I’d try to get up I’d lose my balance and fall down no matter how hard I tried to get up, I just couldn’t manage.

Later, two figures appeared and filled the food containers for us. They noticed I wasn’t moving properly so they took me down to their house. One of them put me in the pocket of their hoodie, where it was cozy and warm. Finally we made it down to the house and they took me into a big room filled with lego, where I was cuddled by four children.

They brought a miniature wooden house big enough for me to live in for a while and they put sawdust, water and food in for me. I liked it but I felt too lonely and cold so I chirped until they came and cuddled me.

They had to leave me alone for periods of time and at night time so they took a feather duster, made of ostrich plumage and laid it on top of me. It was warm and it felt like my mother so sometimes I’d pretend it was.

They said I was beautiful so they named me Beauty. They didn’t know at the time that I was a boy. Those humans are terrible at assuming genders!

I got lots of cuddles all the time and they moved me into a bigger cage where I could walk around more when my leg was strong enough. I went outside all the time with my new family and I learnt how to walk on one leg. My one leg was giant and muscle-y.

After three weeks had passed my family moved me to a big pen at the barn with my siblings. I was really excited to see them again, they missed me too. There was a board in the middle of our pen. I didn’t know at the time what was on the other side but like an answer to my question a big black angry hen came out and started pecking at me and my siblings but luckily my other family came and stopped it.

Sometimes my siblings would be curious, and they’d go over on the other side to see the big angry chicken but I think they’ve learnt their lesson.

Then there were even more chicks coming in the barn and I came out of the pen and into a big open room with my siblings and some other chickens our age that I didn’t recognize.

Sometimes I wonder what it would be like if I had two legs. My mother would have stayed with me. She had to make a choice, it was me or her other four chicks because she couldn’t take care of me and them. But yet again I love my other family. But if Coconut’s not my mom then who is?

The next day the little girl Arya took me out for a walk around the orchard and showed me the chicken coop that I will someday hopefully get to live in. “The other chickens might peck you because you look different but you have to be strong”. She says to me seriously. She puts me down on the ground but I just sit on her foot, not wanting to leave her side. But she takes me off and says- “Don’t worry, I’ll be watching you and I’m right here”. So I hop around.

A big golden coloured rooster comes up to me but my human sister shoos him away from me. “That is the king of the coop, his name is Paddington. He’s my chicken but he has to do his king duty which is protecting the flock, and since you look different he thinks you could be a potential threat, Try to stay away from him”. She says and I wish I could reply in their human language.

She picked me back up and we sat there for about half an hour. Two leghorns look at me curiously. “One of those leghorns is your mother, you know?” she says. I wanted to go see them but they were too skittish and they just ran off.

“Many chickens lay eggs for Coconut and she hatches them and you just so happen to be one of them”. I am shocked by this news. And I still am to this day. Later that night when my siblings were fast asleep I thought of the information I had just heard. I now know who my mother is and what the chicken coop looks like, and that the king of the coop doesn’t seem to like me. My life is crazy and it’s a miracle that I’m still alive.

I am very happy now. And I’m even in a little movie that Arya is filming. Spoiler alert, I’m a talking chicken. But the movie isn’t done yet. I’m very glad that they took the time and effort to save me and now I am very happy. So thank you for listening to my story! 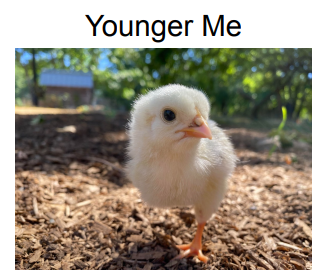